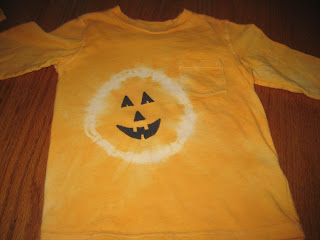 My cousins, Erin and Cami, invited the boys and I over for a craft day. Erin's sister-in-law was there as well, which gave us a total of 4 moms and 9 kids ages 5 and under. Crazy? Yes. Fun? Of course. 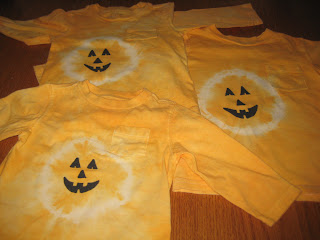 Cami found this idea in this month's issue of "Family Fun" magazine. Pre-washed white shirts, one rubber band around a gather in the middle of the front to create the white circle, and a bottle of orange Rit dye. Follow the directions on the dye bottle and about twenty minutes later, you have a nice circle shape for your pumpkin. I bought a fabric marker from Michael's, drew the faces on (use cardboard underneath the front of the shirt so it doesn't sink through), and heat set it with an iron. 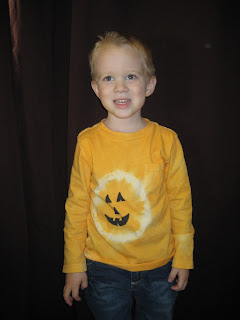 Great idea Cami, thanks for getting us crafting this Halloween! We also made some cute bats using little pumpkins and foam pieces, but Scotty has this thing with taking things apart and they were destroyed before I could take a picture. Way to go kid.
Oh, and by the way Erin and Cami, I was planning on washing these separatly a few times just in case the dye washed off, but they ended up accidently in a load of whites.....I am happy to say my whites are still white and the shirts still look great, so no worries in case you were wondering about washing yours. The fabric marker hasn't faded yet either, but even if it does, just pull it out and do a little touch up.
Posted by The Crabtree Chronicles at 21.10.08

Email ThisBlogThis!Share to TwitterShare to FacebookShare to Pinterest
Labels: Halloween

Thanks for letting me know about the shirts. I've been hesitant to wash mine with anything else, but I guess I'll go for it. Yours turned out great!