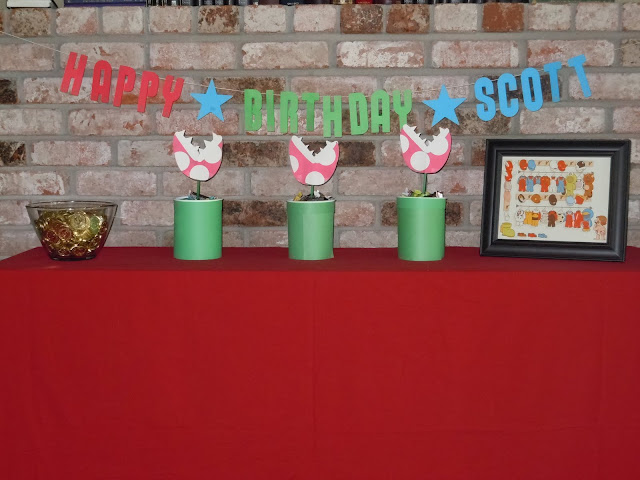 My oldest is obsessed with Mario Bros. video games.  For the birthday party, we decided to do the Mario theme all the way.
I made a banner out of cardstock with my Silhouette.  The prizes for the games were fake gold coins to the left. I bought a big bag of them at a party store.  I took 3 yogurt tubs, covered them in green paper, and made some "piranha plants", cutting out construction paper shapes and fusing them together with glue stick.  Very 2nd grade.  The plants are taped to a green straw and the tubs filled with candy for the goody bags.  The picture to the right is a Mario print that my son loves.  The table is my kids' toy organizer with a red sheet draped over the top. 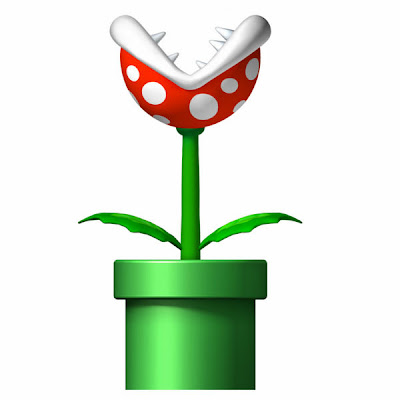 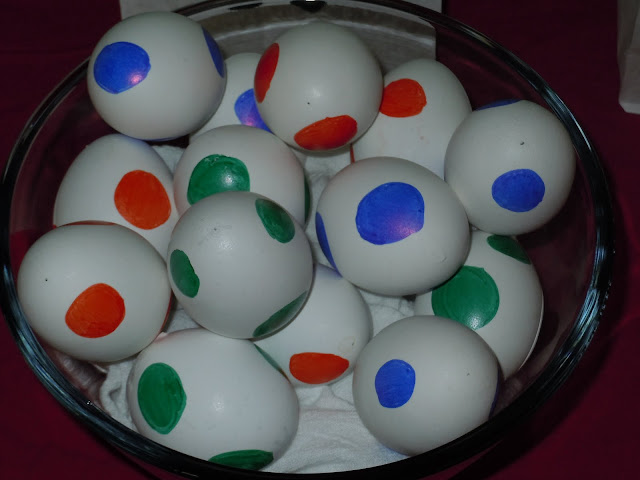 Games:  We played "Smash the Yoshi Eggs".  Found a great tutorial for filling egg shells HERE.  I blew out the eggs, filled them with glitter and Mario clipart, and sealed the hole with tissue paper.  Sharpie markers to decorate circles on the outside and they were done. 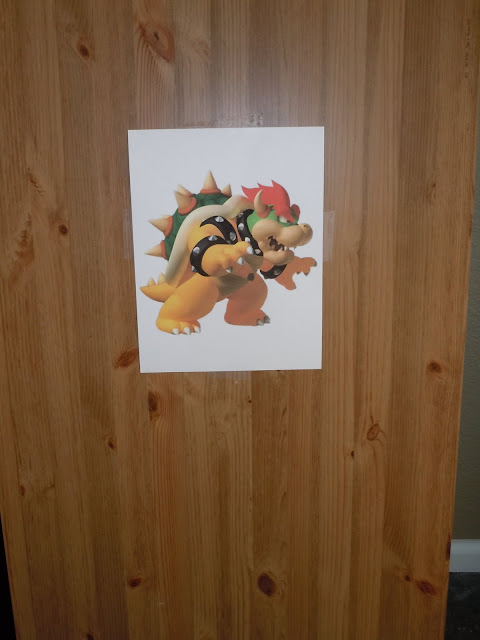 Everyone got to throw and egg at Bowser, the bad guy in the Mario game.  Most of the eggs were filled with green glitter and if you smashed it, you received one gold coin.  If you were lucky, and got a gold glitter egg, you received two gold coins. 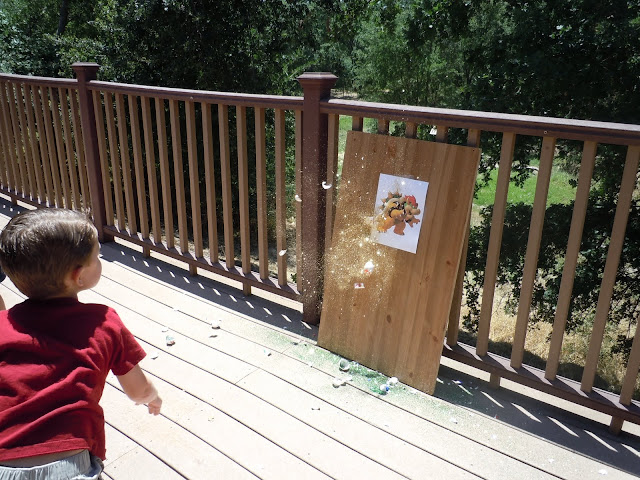 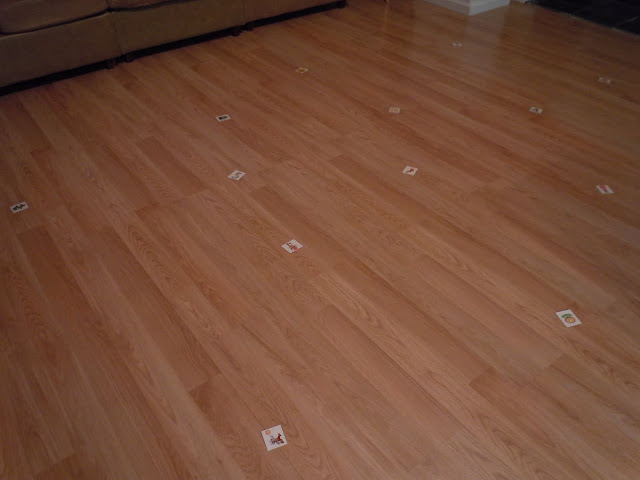 We also played "Musical Mario".  I found a lot of different Mario clip art, printed out the images, and taped them to the floor.  We have some of the Mario video game music on CD and played it while the kids danced around.  When the music stopped, everyone found a picture to stand on.  I would call out a picture and whoever was standing on it won a gold coin. 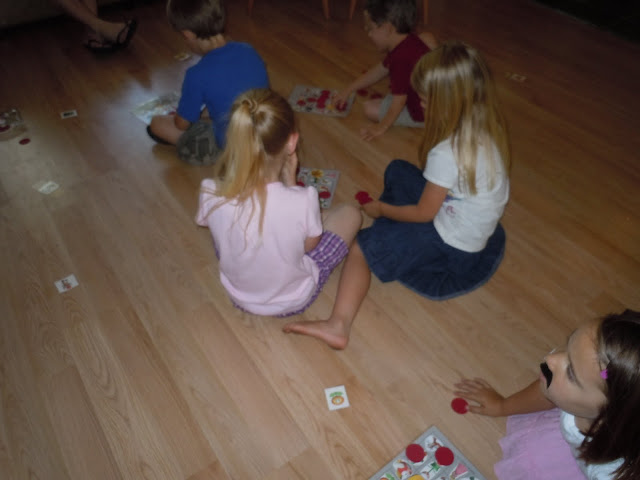 To involve my birthday boy in the preparations, I had him glue Mario clipart images onto Bingo boards.  We played Mario Bingo for gold coins, it was a hit.  I'll try to get a picture of the Bingo cards on here soon. 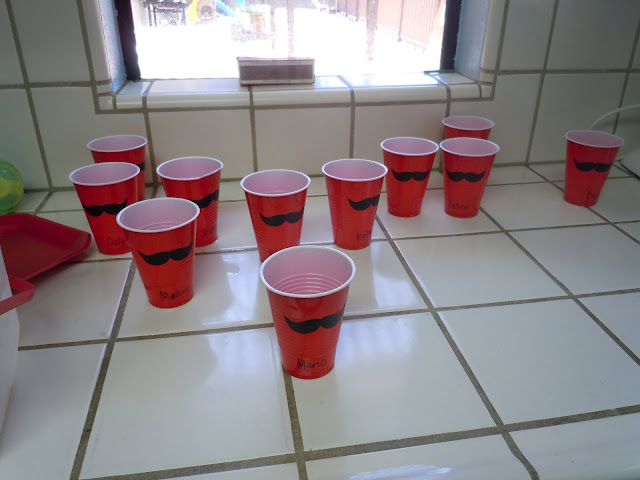 Mario mustaches everywhere!  Vinyl ones on the party cups. 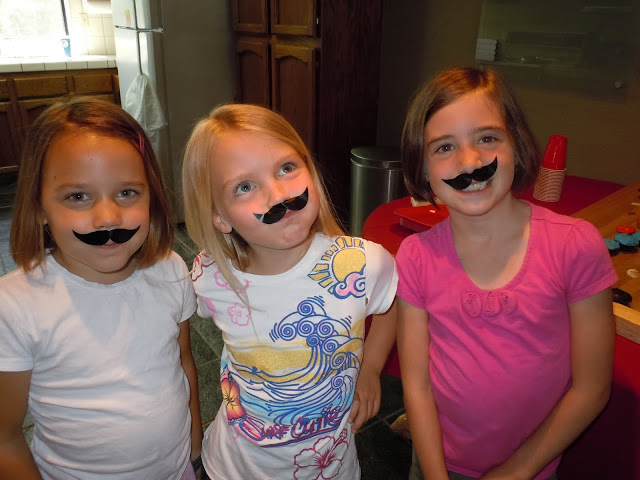 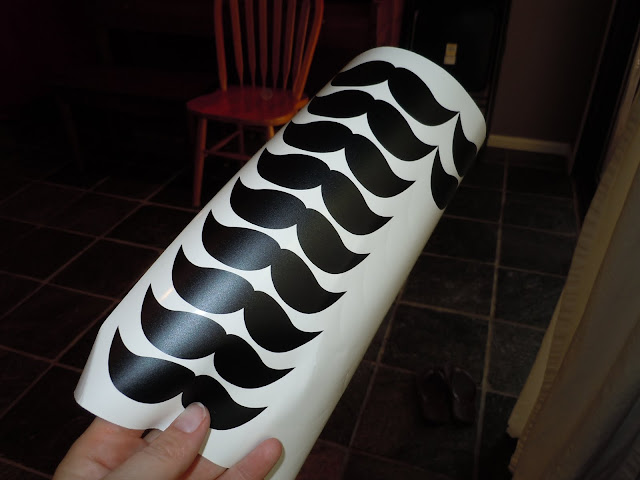 Passing out the mustaches.  It was nice having a few extras as kids would take them on and off and they would lose their stickiness.  No problem, here's another one. 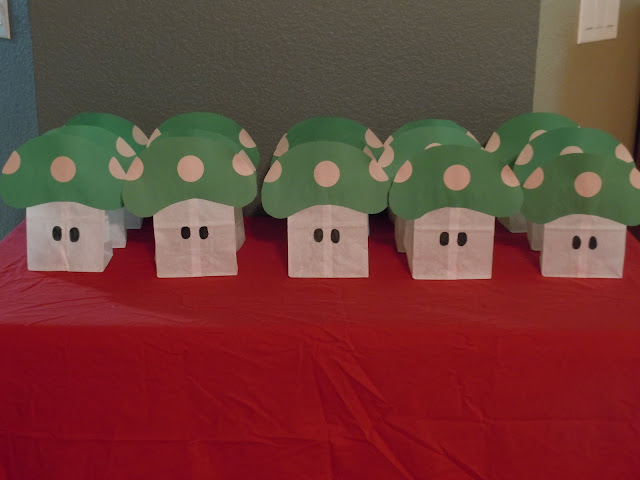 Party favor "1 Up" bags.  Everyone had their name on the back of their bags and they would put their gold coin winnings in them throughout the party.  Candy and some extra mustaches topped it all off. 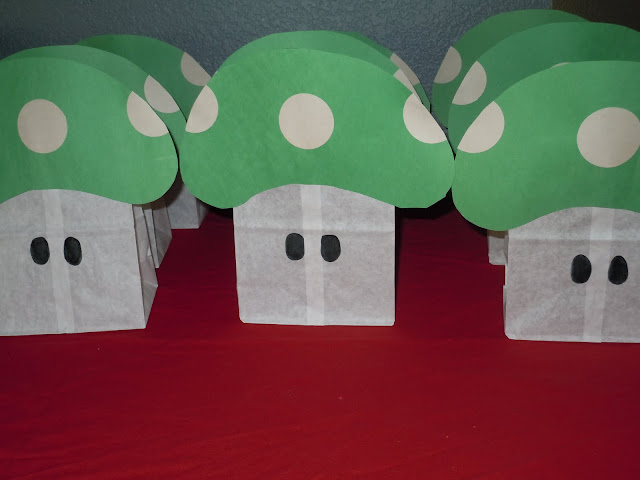 They are pretty cute, I must admit.  My son cut out the green tops and white circles (I traced them on the paper for him).  He did a great job with the party prep.

Not pictured:  So busy with hosting the party, I didn't get my camera out for every activity.  We also played "Smash the Goomba", which was a brown balloon with a face drawn on it.  Before we blew them up, we put a gold coin in each balloon.  The kids sat on them to pop them and retreived their gold coin.  A little too scary for some kids, don't blame them...it was loud! 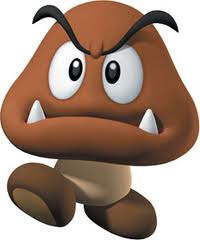 Here's what a Goomba looks like.  I did a brown balloon with white vinyl eyes and drew the eyebrows and mouth with teeth on with a black Sharpie marker.  Wish I would have taken a picture, but they are all smashed now, sorry!

Still to come:  The Mario cake (you noticed it was missing, right?) and invitations.  It was a lot of fun and a lot of work.  I'm ready to get out of Mario mode and move onto some other projects.  My son just wants to play his new Mario game.
Posted by Brittney at 21.6.11

The Tribe of Scott said...

Such a creative mother!! Your boys are soooo lucky!! What a fun & cute party!!

WOW! I'm so glad you got to work together with the preparations. Wow!

Wow. Looks like it was a great party!! Do you mind sharing where you got the mustache stickers?

I made the mustaches on my vinyl cutting machine. You could probably google it and find some for sale on an etsy shop. I can make you a sheet too if you want. $5 per foot of vinyl plus shipping. Leave me your email if you are interested.

I love the Moustaches, Im having a Mario party for my son in 3 weeks and would love some, how many per sheet?

There are 3 rows of 9, so 27 mustaches for $5, plus shipping. Please leave me an email or contact information if you are interested.